Recording wise one could judge “Rabbit & Turtle Take The City” as being some kind of failure – if there wasn’t purpose lurking to actually provoke this judgement. The song is bumping like a mindless Blues over a lo-fi guitar-sound, slowly moving. Like dragging Tom Waits through a distortion box. But it is John Andrews singing & playing, who has been playing guitar with New York’s independent band Botanica for several years.
Loudboy Andrews makes his way through a fucked-up sonic rock landscape, that is augmented by viola and violin and finds Nena, whom he is playing with on (“Hiding”) and ex-Bauhaus singer Peter Murphy (“Pretty Bleak”) on the guestlist. Loudboy shows himself rough and edged, soft and forgiving, straight and malancholic.
Where no herb is growing anymore even the strongest plants have difficulties to raise from their roots to build flowering landscapes. While “Pretty Bleak” could work as a metaphor for coolness it feels in reality of global end times moods as a negative sign. On “Pretty Bleak” Peter Murphy’s voice darkens the depressed attitude of this sluggish song. Andrews has been a studio and live guitarist für Murphy since 2009.
“Underhill” starts off as a soft songwriter ballad garnished by Anne de Wolff’s violin playing. Distorted guitar and voice in “God Love Money” counter checkered the happy sounding “Angelene”, which tells about little gifts by nice sonic plays taking back a little of the toughness of the entire album…..

Loudboy, this is John Andrews, long-time guitarist of New York’s
Indie-Rockers Botanica. He recorded his solo-debut with guests like Peter Murphy (Bauhaus) and Nena waggling through Pop, Rock, Folk, Blues and Psychedelia (all that in the right dose), likewise pleasant as a singer & songwriter. The album is retro-inspired but timeless at the same time and pretty damn sorted.

Klenkes, Aachen– CD of the month

John Andrews, guitarist of New York’s Botanica, recorded his debut partly in Aachen’s Pink Noise Studio, co-produced by Ulli Rattay, who released his debut “Loudboy” on his Aachen-based label rent a dog. This shall be enough of local connections and a special bonus isn’t given out anyway. Because Loudboy shines in its own right and is full of stylistic varieties and joy of playing, that one might get afraid to find Loudboy Andrews, who inherited this name from Helmet-Boss Page Hamilton, sitting in between all chairs.
“Rabbit & Turtle Take The City” is a heavy duty Bluesrock song, switching between Tom Waits and Cream. “I Gain A Gain” and “Wonderful” show similar melodic power and ear treat hooklines as the best songs of German band Blackmail. A slowmoving ballad like “Pretty Bleak” is waft around by darkness you expect to have for a duett with ex-Bauhaus singer Peter Murphy.
When the tempo is slowed down – like for ballads as “Underhill”, “Angelene” or “Mysterium” – you might think of the for ever underrated singer/songwriter Robyn Hitchcock (The Soft Boys) and his fusion of folk and psychedelic rock: John Andrews meets him here at eye-level.

Usually it’s quite a way from Peter Murphy, the voice of Bauhaus, to Nena. Here it only takes 9 songs. But both of these guest-vocalists do not categorize the musical spectrum of Loudboy – neither Dark Wave nor too many ballons can be found on Botanica’s guitarist John Andrews debut. Instead you’ll get psychedelic distorted guitars, dreamy ballads, a happy return of the WahWah-pedal and a retro mood reminiscent of drug-take-in during the 60ties.

Click here to receive our mailer and get access to exclusive videos, pics and information about Loudboy! 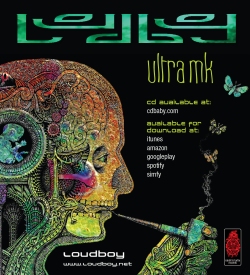